Warwick Castle’s history starts over 1,100 years ago when Danish invaders began moving in on Saxon lands from the North. The Saxon army was led by the eldest daughter of King Alfred the Great, a warrior Princess called Ethelfleda. In 914AD she ordered the building of a ‘burh’ or a fortified earthen rampart to protect the new town of Warwick.

The first castle appeared on this site thanks to another invader, William the Conqueror. After his victory over King Harold at the Battle of Hastings in 1066, William needed to consolidate his power in England. In 1068 he ordered the building of a wooden motte and bailey castle in the Midlands as a means of holding the area and securing his lines of supply. William entrusted the construction of Warwick Castle to Henry de Newburgh, who later became the first Earl of Warwick in 1088.

The de Newburgh family would hold the castle for five generations. Under their ownership the wooden castle began to be rebuilt in stone, while Warwick developed into a thriving market town. The Newburghs also witnessed the castle’s first attempted siege during the period known as The Anarchy. The last de Newburgh, Thomas, died without an heir in 1242, so the castle and estate passed to his sister, Margaret.

However, King John did not think Margaret was suitable to run the castle alone so she was married off to John Du Plessis (c.1242-63). The two hated each other and would only ever meet a few times throughout their lives. Unsurprisingly, the couple died childless and as a consequence, in 1263, the title changed hands once more, this time falling to Margaret Newburgh’s cousin, William Mauduit (1263-8).

Mauduit had the misfortune of being Earl during the Second Barons’ Revolt (1264-1267), a civil war between King Henry III and a group of dissenting nobles. The rebels were led by Simon de Montfort, Earl of Leicester, who was stationed at Kenilworth Castle, a mere eight kilometres away. Mauduit remained loyal to the King. Despite the close proximity and likelihood of an impending attack, Mauduit did little to prepare the defences of the castle. It was no surprise therefore, except perhaps to Mauduit himself, when John Giffard, Governor of Kenilworth, attacked in 1264. He easily breached the castle walls, captured Mauduit and his wife and held them to ransom. They were released on payment of the ransom and returned to Warwick Castle.

On his death in 1268, Mauduit was succeeded by his nephew William de Beauchamp (1268-98). It was with William that a dynasty lasting 181 years and bringing Warwick Castle to the height of its fortunes would begin.

William de Beauchamp served as a military commander under King Edward I, and the influence of the Beauchamp family grew. His son, Guy (1298-1315) was named as one of the Ordainers, a group of Earls who aimed to impose control over King Edward II and govern the kingdom. Their main complaint against the King was the role and powers he had granted Piers Gaveston, a Gascon knight and the King’s probable lover. By 1312, tensions between the King and the Ordainers had risen, therefore Gaveston surrendered to the Earls under promises that his life would be spared. However, Guy de Beauchamp seized the prisoner and brought him to Warwick Castle. After a perfunctory trial in the original Great Hall, Gaveston was sentenced to death and beheaded in the woods just outside Warwick. This move caused a political catastrophe for Guy and he died a mysterious death just three years later.

His son, Thomas Beauchamp (1329-69), who next inherited the Earldom, came of age around the time of the outbreak of the Hundred Years War with France. In 1337 King Edward III restated his claim to the French throne and the long conflict began. Thomas emerged as one of the King’s favoured commanders. He fought at the Battle of Crecy (1346) and the Battle of Poitiers (1356), and was amongst the first men to be made a Knight of the Garter. Thomas made his fortunes in France ransoming French political prisoners and he started a massive reconstruction of Warwick Castle. He began the building of the towers which still stand today.

Thomas de Beauchamp’s son, Thomas II (1370-97 and 1399-1401), was less fortunate as his fate became bound with the domestic feuds and political purges that marked the reign of Richard II. Thomas and four other Lords, known as the Lords Appellant, forced the King to dismiss or execute his favourites. But in 1397, King Richard had his revenge. Thomas was placed under arrest in the Tower of London accused of treason. The tower in which he was held is still named ‘Beauchamp Tower’ in his honour.  As a result of his trial, he was exiled to the Isle of Man, and his lands and titles were forfeited. It was only when the King was usurped by Henry Bolingbroke (Henry IV) in 1399 that Thomas could return and reclaim his castle.

The next in line, Richard de Beauchamp (1401-39), became perhaps the most prominent Beauchamp of all. He served alongside King Henry V for over eighteen years and on the King’s death he was named tutor to his son, the young King Henry VI. When, in 1431, the English brought the captive Joan of Arc to England, it fell to Richard Beauchamp to superintend her trial and subsequent execution.

Richard’s son Henry (1439-46) had grown up as a companion to the boy King Henry VI. In 1445 he was named the first, and only, Duke of Warwick. Sadly, he died the following year. He was survived only by an infant daughter, Anne. Unfortunately, when she died at the age of five the Beauchamp dynasty at Warwick Castle ended.

The title would instead pass to Anne’s uncle, Richard Neville (1449-71). Through the course of the Wars of the Roses, Neville at first helped to depose King Henry VI, but later defected and deposed King Edward IV to return Henry VI to the throne. This earned him the title of the Kingmaker. But his ambition would become his downfall as King Edward would reseize his power and defeat Richard Neville at the Battle of Barnet in 1471. On his downfall, the castle was awarded to King Edward’s brother, George, Duke of Clarence. However, after an attempt to take the throne George was executed for treason in 1478. The castle was instead awarded to the king’s other brother, Richard, Duke of Gloucester. He set about remodelling the castle for himself by commissioning the construction of Bear and Clarence Towers.

However, like the castle’s two previous owners before him, Richard’s lust for power would become his downfall. On the death of King Edward IV in 1483 and the disappearance of his nephews, the Princes in the Tower, Gloucester succeeded as King Richard III. Richard would prove to be an unpopular king and was defeated at the Battle at Bosworth in 1485 by Henry Tudor, who succeeded as King Henry VII and inherited the castle.

Despite being the castle’s most famous owners, the Tudor ownership of the castle would prove to be the darkest period in Warwick’s history, as King Henry VII and VIII would allow the castle to fall into disrepair. Despite paying for improvements to the kitchens and reinforcing the south face of the castle, many areas of the castle were abandoned by the Tudor monarchs. In 1547, the castle was granted to John Dudley, but he too would ignore the castle and spend little to no time in Warwick. By the time the Dudley line ended in 1590 the castle was in such a state of dilapidation, that in 1603 King James I scheduled the castle for demolition.  However, in an attempt to gain more support from the English nobility, King James instead chose to grant the castle to Sir Fulke Greville. The title, Earl of Warwick, was bestowed upon Lord Rich in 1618 and remained in his family until 1759. 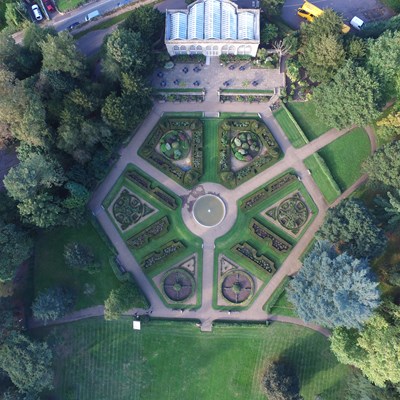 Sir Fulke embarked on a phase of rebuilding the castle which included the restoration of the medieval walls and towers, the construction of new domestic apartments, and the landscaping of private lands. Sir Fulke was later ennobled as Baron Brooke, but his ownership ended when he was brutally murdered by his manservant, Ralph Haywood, in 1628.

Sir Fulke’s successor, Robert Greville (1628-43), became Commander of Parliamentary forces in Warwickshire and Staffordshire at the outbreak of the Civil War. His role meant that the castle would witness its final siege in 1642 and survived three weeks of sporadic bombardment from Royalist forces. After the execution of King Charles I in 1649, Oliver Cromwell maintained a military garrison at Warwick to imprison Royalist soldiers until 1658.

Robert Greville, 4th Baron Brooke, (1658-77) proved to be very different from his father as he would play a part in the restoration of the monarchy in 1660.  Robert then continued the restoration work and remodelled the state apartments to their current design. His successors would enjoy the fruits and splendour of the Restoration court and earned themselves a reputation for their decadent, rakish behaviour as they turned Warwick Castle into a great party location.

In 1759, Francis Greville (1759-73) was created Earl of Warwick after 169 years of the title being dislocated from the castle. He then ushered Warwick into the Age of Enlightenment by embarking on a major project to transform the castle into a civilised country house. He also commissioned Lancelot ‘Capability’ Brown to landscape the gardens.

The next Earls of Warwick, George and Henry Greville, continued improving the look and style of the castle. Throughout the next century, they travelled across Europe and amassed the great collection of paintings, objects and furniture displayed within the State Rooms. Unfortunately, George, 2nd Earl of Warwick, declared bankruptcy in 1803 and was forced to sell off outlying estates, and in 1815 he opened the castle to tourism to bring in more money.

The family suffered a serious setback in 1871 when a great fire burned through the private apartments and Great Hall. A huge public restoration fund was raised to restore the apartments with the finest décor.

The castle would next witness the tenure of Francis Greville (1893-1924) and his wife Daisy, 5th Earl and Countess of Warwick. Daisy would become renowned for her scandalous high society weekend parties, hosting the elite members of Victorian society including Edward, Prince of Wales. Daisy’s turn towards socialism in the 20th century ended the glittering era of society balls at the castle, and the family entered the First World War in financial woe. Leopold, 6th Earl of Warwick, known as Guy (1924-28), had been a Reuter’s correspondent during the Russo-Japanese War of 1904-05, and served as a Brigadier General with the Canadian forces 1915-18. However, the horror of the conflict impacted him deeply and he died of alcohol abuse at the age of 45.

The 7th Earl, Charles Greville, known as Fulke (1928-84), tried his hand at breaking into Hollywood under the stage name of Michael Brooke. His career peaked with a supporting role in The Dawn Patrol (1938), in which he starred alongside Errol Flynn and David Niven. However, his wooden performance marked the end of his Hollywood career. On his return to Warwick he installed a cinema screen on the roof of the castle which is still there today.

His son, David Greville (1984-1996) struggled to maintain financial control of the Warwick estate and sold much of the Warwick collection to help fund the heavy cost of owning a castle. This proved to be a very unpopular decision and so, by November 1978, he felt he had exhausted all options and sold Warwick Castle to the Tussauds Group. Under the Tussauds Group, which was absorbed into Merlin Entertainments in 2007, Warwick Castle has undergone millions of pounds of restoration works to maintain the castle’s glorious past and ensure, through continued research and conservation, that the castle will continue to stand as Britain’s Ultimate Castle.