Guy’s Tower was built in the 14th century. It has twelve sides and five storeys. 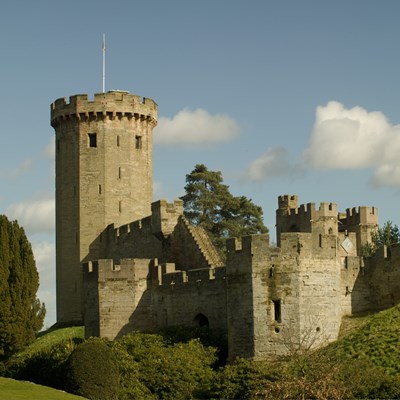 The first four storeys consist of a central stone-vaulted chamber with two small side rooms; one a garderobe (medieval toilet), the other probably a bedchamber. The fifth storey is a hexagonal guardroom.

This tower would have originally been used to accommodate important guests of the Earls of Warwick. However, these rooms were sometimes used to house prisoners including William Sutherland, William Stanley, and an Edward Disney, all leaving their identity behind through graffiti on the walls.

The tops of the towers are encircled by parapets that added a further layer to the castle’s defences. Cut into the floor of the parapet are openings, or machicolations, through which the garrison could drop or pour substances onto the attackers below. Today, Guy’s Tower provides beautiful panoramic views of Warwickshire.