The first defence of an attack! 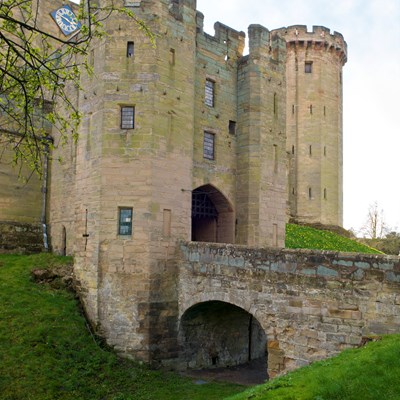 Since the entrance to a castle was likely to be a common target for an attacking force, it was necessary for the defences to be as effective and deadly as possible. The first defence attackers would face was the Barbican. The Barbican was an exterior walled passage which had a drawbridge and extended out into the ditch to provide the Gatehouse with more protection.

Today the entrance to the barbican and gatehouse is via a concrete bridge. However, during the middle ages there was a drawbridge in its place which could be raised or lowered in case of attack. Should an attacking force manage to drag the drawbridge down, they would be faced with the first of two portcullises. Should they manage to get through this, they would then be faced with a set of massive oak doors. The huge hinges on either side of the portcullis give testament to the size and weight of this barrier. As an enemy is trying to breach the doors they would be facing the terror of the murder holes above them from which would rain down a barrage of missiles, burning sand and boiling liquids.