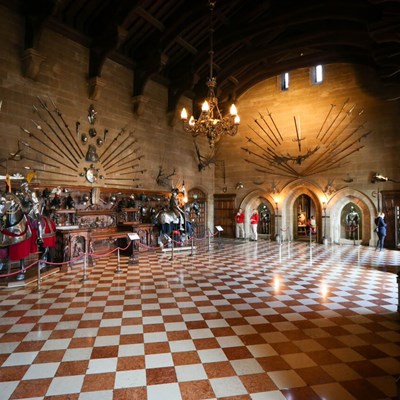 The Great Hall is the largest room in the castle. It is approximately 12 metres high, 19 metres long and 14 metres wide including the window bays. It was first constructed in the 14th century, when a fire would have been in the centre of the room with a hole in the roof to let out the smoke, and the walls contained small narrow windows and some arrow loops. The original hall would have been similar in size and grandeur, but the current Great Hall was rebuilt in the 17th century to provide a grand entrance for those visiting the Earl of Warwick. It was largely restored in 1871 following a great fire which destroyed the old hall.

Today the Great Hall stands as a romantic reinvention of a medieval hall and was designed to reflect the vast history of the castle. It holds the remnants of the Earls’ famous weapons and armour collection that was acquired throughout the 19th century. It contains equestrian armour, pole arms, rifles, parade armour, and a suit of child’s armour, amongst many other treasures.

Within the Great Hall you will find the Kenilworth Buffet, one of the most impressive items in the collection. It was made for the Great Exhibition of 1851 by Cookes and Sons of Warwick, who were awarded a prize medal for their craftsmanship. The buffet is made from a single oak tree which grew at Kenilworth Castle and was cut down in 1842. In 1852 the buffet was presented to George Greville, Lord Brooke, as a wedding gift from the people of Warwickshire. Francis Greville commissioned this room in 1763, and it was designed and built by some of 18th century England’s finest craftsmen.

This room has seen some impressive dinner parties and distinguished party guests over the years. Some of the most illustrious guests include Queen Victoria and Prince Albert who had lunch here in 1858, Edward, Prince of Wales, later King Edward VII, and Queen Elizabeth II and Prince Philip, Duke of Edinburgh, who completed their visit with lunch in this room in 1996.

At the far end of the room hangs a famous portrait of King Charles I on horseback with his Master of Horse, Chevalier Saint Antoine. It is one of a handful of virtually identical pictures produced in the studio of Sir Anthony Van Dyck. 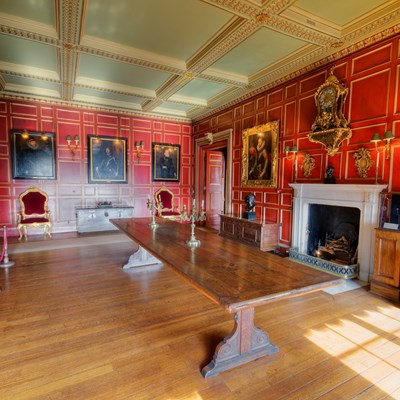 The Red Drawing Room is the first of the state rooms and primarily served as an anteroom. Its red lacquer panelling and enclosed space was designed to realign the expectations of guests before passing through to the lavish rooms ahead. The room is primarily filled with portraits and artefacts from the 16th century. 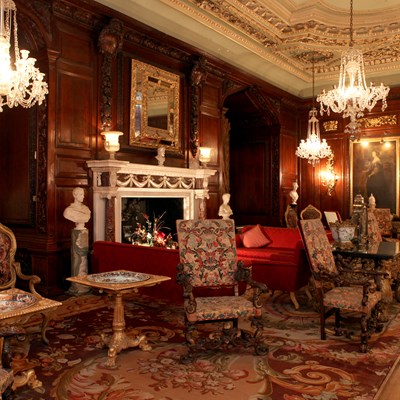 This room is named after its intricate 17th century cedar panelling which was completed in the 1670s by William and Roger Hurlbutt. It is at the heart of the state rooms and was used for hosting grand festivities over the centuries including banquets and ballroom dancing.

The room has a distinctly Italian style. The plaster ceiling, originally designed by James Pettifer, was gilded in the 19th century to replicate the baroque ceilings of the Renaissance, and the room was filled with impressive items collected by the 3rd Earl of Warwick throughout his grand tour of Europe. The five chandeliers in this room date from the mid-18th to the late 19th century.

This room is aptly named to reflect its green painted panelling. The room functioned largely as a private gentlemen’s room for travelling aristocrats to rest and play in the comfort of this tranquil space.

The beautiful coffered ceiling, made up of octagonal sunken panels with central motifs, was inspired by the ceiling of the Temple of Bel in Palmyra, Syria. Unfortunately, the temple was destroyed in the conflict in Syria in 2015, so this ceiling has become more poignant since that event. The ceiling was installed in the 1750s by Francis Greville, 1st Earl of Warwick.

Within this room there is a mysterious secret door which hides a 14th century escape. This hidden stairway and passage lead down to the river below. The incredible tapestries surrounding this room were created by Franciscus Spiringius in 1604 in Delft, Belgium.  They illustrate the gardens of a medieval palace, and the detail is extraordinary, with flowers, animals, insects, objects and people all intricately woven into the design. It is probable that the tapestries were acquired by Sir Fulke Greville.

This small and intimate room was redecorated by Daisy Greville, 5th Countess of Warwick, in the 1890s to convert the private dressing room into a ladies’ boudoir. Daisy sought a room in which to host the ladies during a party whilst the men occupied the Green Drawing Room.

The blue silk that adorns the walls is from Lyon and reflects Daisy’s love of French style and culture. This is added to by the display of Marie Antoinette’s silver-faced clock. 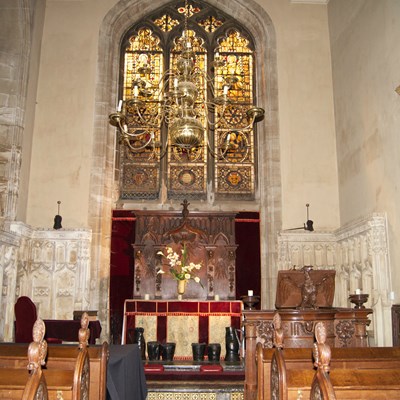 This small chapel was commissioned by Sir Fulke Greville in the early 1600s. The chapel was the meeting place of the Earls of Warwick and their families every Sunday until the mid-20th century. The stone screen divided the family from their household staff. Over the years weddings, christenings, and funerals have taken place here.